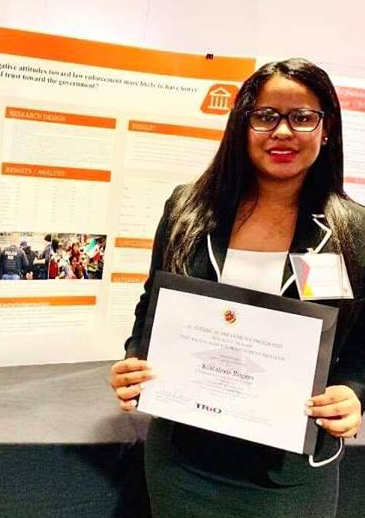 Kiaralexis presenting her research at the National McNair ConferenceSenior Kiaralexis Rogers became one of the first OSU participants in the Ronald E. McNair Scholars Program, which was created to help prepare talented juniors and seniors from low-income, first-generation, and/or underrepresented groups for graduate programs.  For her project, Kiaralexis conducted original research under the guidance Dr. Rebekah Herrick.

Her project was titled “Are Hispanics who have negative attitudes toward law enforcement more likely to have lower levels of trust toward the government?” She presented this research at the National McNair Conference on March 15, 2019 at the University of Maryland.

In speaking about the importance of this research experience, Kiaralexis had this to say:

"As a McNair Scholar, I worked closely with my political science professor on public policy seeking to advocate for minorities, especially for the Hispanic community.  Conducting research on race is vital to uncover facts rather than depend on assumptions, as well as to be able to positively impact our communities. This is why I have conducted research in Oklahoma City: to better understand our current issues and find solutions for those issues. More specifically, my research focuses on exploring how the attitude of trust Hispanics have towards the U.S. government has been negatively affected by their views of law enforcement. My research extends to seek advocacy and solutions for the Hispanic community due to the fact that such attitudes can lead to dangerous consequences.

"I work diligently to be a voice for the voiceless in my community. I heard about the McNair scholars through a mentor of mine last spring. She introduced me to Brett Lukins, who has become not only a wonderful mentor for me but also a motivator. The McNair program aims to promote academic and professional development of underrepresented students who, like myself, will pursue further education following completion of an undergraduate degree. I am amazed by how much the McNair staff believe in and support me. As I am currently applying to law schools they have suggested Ivy league programs such as Harvard and Stanford - schools I never thought were in my reach. This just shows how much they truly believe in me."

Kiaralexis is a member of the Oklahoma Intercollegiate Legislature team and an active promoter of minority issues as an OSU student, serving as Vice President for The League of United Latin American Citizens.  She intends to continue this advocacy work after graduating law school, where she plans on focusing on immigration law and criminal law to advocate for reform. She plans to practice law in Oklahoma, believing that a law degree will allow her to continue to "assist the voiceless in our nation."