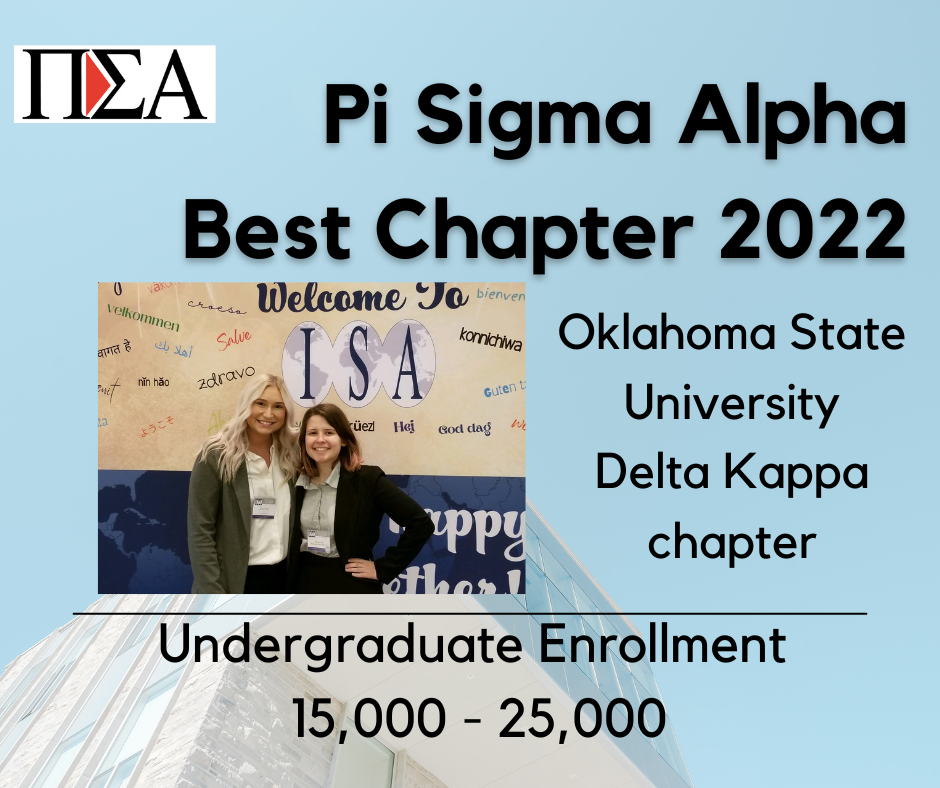 The OSU Chapter of Pi Sigma Alpha was recognized by the national office as one of the best chapters in the country in 2022.

Membership in Pi Sigma Alpha offers students the right to wear honor regalia at graduation, participate in a national student research conference, and compete for a prestigious internship scholarship, graduate school scholarships, and best paper awards.  Local chapters may also apply for grants (up to $2000) to help fund special events and activities on campus.

Undergraduates must be junior standng or above and have completed at least ten semester-credits of work in political science.  One of these courses must be upper-division, and they must maintain an average grade of a B or higher in all political science courses. They must have achieved an overall GPA of 3.23 for juniors and 3.273 for seniors.  Students do NOT need to be political science majors to qualify for membership.

Faculty Membership: Members of the faculty of the Political Science Department, including emeriti members, are automatically eligible for membership.

Honorary Membership: Chapters are entitled to award two honorary memberships per year to any person of recognized ability and achievement in the field of political science.

To become a member of the OSU chapter of Pi Sigma Alpha, complete the online Application Form before the deadline announced in the invitation email. Once you have been approved as a member of our local chapter, you will receive an email from the national organization that will allow you to pay for your membership and order your desired graduation regalia online.

The Delta Kappa (Oklahoma State) chapter has organized several professional development events for political science students. Materials for a few of these events are available below.

The History of the Delta Kappa Chapter at Oklahoma State University

The Delta Kappa chapter of Pi Sigma Alpha was chartered in 1963 by Professor Clifford A.L. Rich, who served as faculty advisor for at least a dozen years. He had been inducted into Pi Sigma Alpha as an undergraduate at the University of Southern California in 1946. The current chapter advisor, Dr. Holley Hansen, was also inducted into the national organization and served as the Truman State chapter Treasurer when she was an undergraduate.

Since the OSU chapter was created, more than 800 students have been inducted.

Originally chartered in 1920 at the University of Texas, Austin, Pi Sigma Alpha seeks to encourage and recognize superior achievement in the study of government and politics at the undergraduate and graduate levels.  As an organization encouraging political education and dialogues from diverse political perspectives, Pi Sigma Alpha alumni often become prominent leaders in local, national, and international politics.  Its alumni list includes one U.S. president, three Supreme Court Justices, dozens of members of Congress, and several U.S. ambassadors.

At present, there are over 850 Pi Sigma Alpha chapters on campuses across the country. Pi Sigma Alpha is a member of the Association of College Honor Societies.  Pi Sigma Alpha has inducted over 300,000 members, and its alunni network includes scholars, politicians, diplomats, lawyers, and justices.