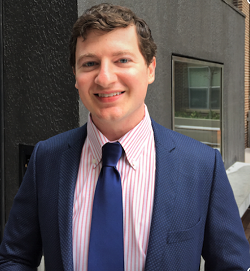 From small-town Oklahoma to a career in foreign service, our 2018 "Rising Star" award winner shows how far an OSU student can really go.

Kyle Ensley grew up on a small cattle ranch outside of Valliant, Oklahoma, a community of 700 in the far southeastern corner of the state. It was always Kyle’s dream to attend OSU in Stillwater, which seemed far from home at the time. During Kyle’s sophomore year, he received the Thomas R. Pickering Foreign Affairs Fellowship from the US Department of State, which eventually led to his appointment and confirmation as a diplomat in the US Foreign Service.

When talking about his degree choice, Kyle tells us:

I started out solely as an international business major, but halfway through my career at OSU, I decided to also earn a double degree in political science so I could focus more on foreign affairs. Ideally, I would have liked to have majored in international relations to prepare for my future career as a Foreign Service Officer, but it wasn’t offered at the time. I have always been interested in US politics, too, so I think the combination was a good fit for me. It also prepared me well for a master’s degree at the Harvard Kennedy School.

After graduating from OSU with double degrees in international business and political science, Kyle earned his Master’s Degree in Public Policy from the Harvard Kennedy School of Government. At Harvard, he served on the Harvard Graduate Council and the Board of Directors for the Harvard and MIT Cooperative Society, Inc. He was then sworn into the Foreign Service, and served three tours before resigning last year. His overseas postings included Nassau, The Bahamas and Abu Dhabi, United Arab Emirates. His most recent posting was as a public affairs officer at the Department of State in Washington, DC. This year Kyle began consulting for Booz Allen Hamilton, a management consulting firm based out of the DC area. He is currently working in Riyadh, Saudi Arabia.

Also known for singing and acting, as a student at OSU, Kyle reached the Top 25 on Season 7 of American Idol, and performed on the Ellen DeGeneres Show. When living in DC he appeared on House of Cards and Veep.

Kyle stresses the important role his OSU professors played in his long-term career success. In fact, he states:

One professor who had a tremendous impact on my life and career was Dr. Graalman, the Director of Scholar Development. I learned about the Pickering Fellowship when I took his “Windows to the World” honors course freshman year, and his office prepared me very well for the application process. He was also very supportive throughout the rest of my time at OSU, while I conducted research and applied to graduate school.

We are proud to honor Kyle's achievements this spring during our Annual Awards Ceremony, and look forward to seeing where his career next takes him!