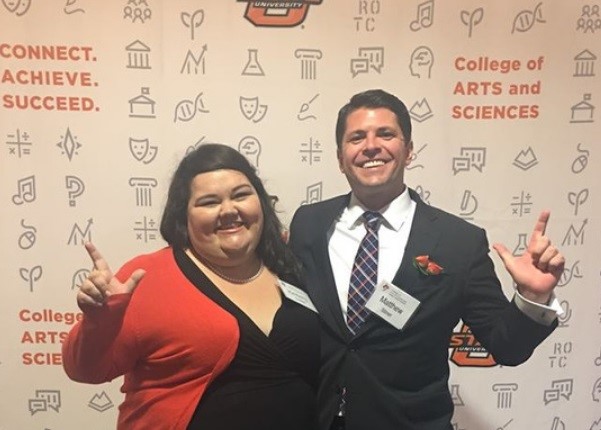 Geddie and Stiner during the Fall 2017 CAS Awards CeremonyEach year, the College of Arts and Sciences recognizes alumnus/alumna who has graduated in the past 10 years who have already reached a major milestone in his/her chosen career, has shown exemplary service to the community, and/or has a proven commitment to volunteerism. In the Fall of 2017, that list of 8 included two political science graduates, demonstrating the amazing achievements of our alumni.

The first recipient, Kimberly Geddie, graduated from OSU in 2009 with a double major in English and Political Science. The Dallas, Texas, native was drawn to service shortly after graduating. She joined Teach For America, working with over 300 high school students as a secondary English teacher in Newark, New Jersey. Six years later, Geddie is now the director of DREAM Partnerships. She travels the globe to support the over 45 international partners as a measurement and evaluation specialist, ensuring the organizations are set up to rigorously evaluate their effectiveness.

The second recipient, Matthew Stiner, graduated Magna Cum Laude from OSU in 2007. He received a prestigious Harry S. Truman scholarship after graduation, allowing him to pursue a master’s degree in Public Administration. Stiner has served in the Marine Corps and received the Combat Action Ribbon for service in Iraq. Stiner later served as the first director of Justice for Vets, a nonprofit organization based out of Alexandria, Virginia. He was also the director of military and veteran affairs at the White House after working as a senior adviser to Secretary of Veteran Affairs Robert McDonald, and is currently the director of government affairs for Humana Military, a subsidiary of Humana Inc.