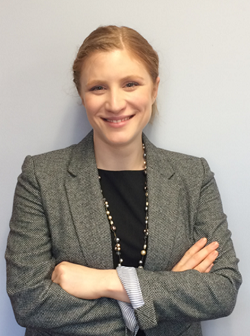 The Department's 2017 "Rising Star" award goes to Courtney Baker, who grew up in Rochester, New York. Halfway through her senior year of high school, she moved to Stillwater, Oklahoma when her parents were offered jobs at OSU. She made the decision to attend OSU and majored in Political Science at OSU, with a minor in Leadership Studies. She studied abroad twice during her time at OSU traveling to Egypt and Spain.

After graduating from OSU, Courtney earned her Juris Doctorate at the University of Minnesota. During her time in Minneapolis, she worked with the local legal aid office representing migrant farm workers. She also participated in a legal clinic, representing a 19 year old who fled persecution for his political beliefs in Honduras. The highlight of her law school career was when she was able to call this client on the last day of class and inform him that the judge had granted his application for asylum.

After law school, Courtney was admitted to the New York State bar. She worked as a legal fellow with the D.C. Volunteer Lawyers Project. Courtney represented domestic violence victims who were seeking protective orders, custody of their children or divorces. She also served as a court-appointed guardian ad litem in high conflict custody cases. Following her fellowship, Courtney moved to Albany, New York where she currently works at the Legal Aid Society of Northeastern New York. Courtney represents tenants who are facing eviction.

When asked what a Political Science degree from OSU meant to her, Courtney had this to say:

Attending OSU was one of the best choices I have made. My experience at OSU made me more willing to take risks, try new things and challenge myself. I specifically remember telling Professor Darcy that I was going to take Professor Adkinson’s very difficult Constitutional Law class and that I felt up to the challenge. Professor Darcy said that it might be a good opportunity for me to see that a limit exists. I know Professor Darcy meant that I probably would not get my coveted “A” in the class.

The grade I actually got in Constitutional Law does not matter as much as the lesson I learned, that challenging myself is worth a little struggle. I wasn’t the smartest student in Professor Adkinson’s class, but I also wasn’t the smartest person at law school either. I am always up for the challenge. And as an attorney at Legal Aid, I face many struggles fighting on my clients’ behalf. Learning to challenge myself, to accept that I won’t always be the smartest or most talented, but trying my best anyway is the most important lesson I learned at OSU. I can only imagine the challenges I will face through the rest of my legal career. Working with clients living in poverty certainly isn’t easy, but I am confident that OSU prepared me to rise to the challenge.

The "Rising Star" Award is given to honor a recent graduate (within the last 10 years) whose accomplishments place them on a trajectory for outstanding professional, leadership, or service achievements.