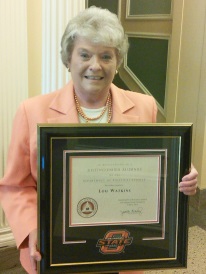 Lou Watkins, Consultant & Member of the A&M Board of Regents

Watkins taught Political Science at East Central University in Ada, Oklahoma, from 1977 to 1991, chairing the Department during her last five years. In honor of her service, ECU continues to host a lecture series in her name, bringing in recognized authorities to address subjects of major public interest.